The Master – How to make an American cult 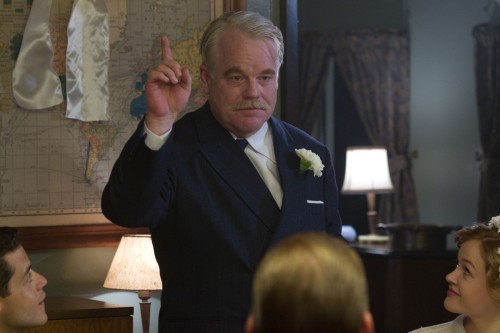 In many ways The Master is Paul Thomas Anderson’s biggest film yet. It may not have the vast landscapes of There Will Be Blood, or a fraction of the characters of Magnolia, but it is shot in many more assorted locations and its themes about faith and belonging are as enormous as any in his previous films. Despite this, however, the previous film of Anderson’s that The Master most brings to mind is Punch-Drunk Love, his small, quirky 2002 romantic-comedy-drama.

The connection is due solely to the two films’ lead characters; both frustrated outcasts with fractured ties to their families, prone to violent rages and uncontrollable crying fits (which they both deny). But unlike Punch-Drunk Love’s Barry Egan, there is little solace or redemption for The Master’s Freddie Quell (Joaquin Phoenix). His attempts to calm his anger and find himself lead him down a very strange rabbit hole.

Discharged from the US Navy following World War II, Freddie flits restlessly from job to job, seeking women to satiate his sex addiction and gulping his own brand of moonshine to appease his alcoholism. Lost in a new America, he stumbles onto the yacht of Lancaster Dodd (Philip Seymour Hoffman), an enigmatic, suspiciously over-qualified writer with an original take on the meaning of life, the universe, and everything. Freddie soon finds himself sailing to New York with Dodd’s family and cadre of followers, and is rapidly indoctrinated to Dodd’s teachings, called “The Cause”.

In little time we can be certain that The Cause is nothing more than a cult built up around Dodd’s increasingly bizarre creations – claims of past lives, a trillion-year-old universe and the threat of a sinister “invader force” from beyond. But Freddie, disillusioned and uneducated, does not see it as such, or chooses not to, or chooses to overlook it; so eager is he to find somewhere to belong. But as The Cause grows in strength and numbers, how poor a fit Freddie is for The Cause, and The Cause is for him, becomes ever-more apparent.

Clearly taking its start-off point from Scientology and its founder, L. Ron Hubbard, The Master has no interest in attacking that religion, and is far more concerned with the personalities behind it; of those who build it, those who are seduced by it and those who cannot be. As much as Freddie thinks he needs The Cause, Dodd needs him. He needs him to prove he can brainwash anyone to his beliefs, but he also needs him because at a base level Freddie cannot be won over. As the success of The Cause skyrockets, Dodd’s Frankenstein’s monster spirals out of control, and Freddie remains his only anchor to humanity, and his only potential escape. It is Dodd’s wife, Peggy (Amy Adams), who sees this element to Freddie, and keen for there to be no limit to her husband’s greatness, observes Freddie and Dodd’s relationship suspiciously. 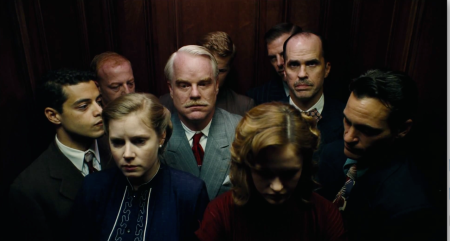 As Freddie, Joaquin Phoenix gives the strongest performance of his career to date. Hunched in posture and speaking always out of just one side of his mouth, he effortlessly portrays Freddie as the damaged goods he is. His shell-shock, disillusionment, and regret all combine to form this bubbling kettle of frustration that Phoenix holds together throughout the film. He shows Freddie as a man incapable of believing the things he is told, but like a good solider willing to fight to the death to defend those same (dis)beliefs. The film’s two most intense sequences both detail Freddie’s indoctrination to The Cause, first as a mere member and later as an acolyte. In the first instance, Dodd breaks him down psychologically by asking him personal questions in quick succession, with the only rules being Freddie may not stop to think or blink. If he blinks, they start over. Shot in a series of unflinching close-ups of the two men, the scene is exhausting and difficult to watch, but brilliantly defines their relationship. For the next tier of his indoctrination, Freddie is forced to walk back and forth endlessly across a room, describing his sensations at each end. Part of a seemingly unending montage, Phoenix brilliantly captures Freddie’s escalating frustration at not being able to achieve or feel what is needed. Unable to look away, we can understand what he is feeling.

Hoffman plays off Phoenix beautifully, as his mentor and father-figure. Channelling Orson Welles’s greatest monsters, Hoffman makes Dodd larger than life in public while showing his all-too-human doubts in private. Dodd could be the love-child of Daniel Plainview and Eli Sunday from There Will Be Blood, fusing those characters’ ruthlessness, devotion and passion for corrupting others. But behind every great man there is a meek but terrifying woman, and Amy Adams steals much of the film as Mrs. Dodd. Her natural shyness and sweetness come across as wholly menacing here, and there are few moments when it is not clear how much power she is actually wielding.

Anderson’s script and direction rarely falter, and he manages to keep the drama building and the audience’s attention throughout the film’s 140-minute runtime. Somewhat disappointingly, The Master is not as breathtakingly pretty a film as one might expect, especially in the wake of There Will Be Blood. Robbed of his regular cinematographer Robert Elswit, Anderson has here teamed up with Romanian D.P. Mihai Malaimare Jr. The photography is crisp and the camera is wielded finely throughout, but there are none of the visual flourishes of the Anderson/Elswit union. With the exception of one beautiful, oft-repeated shot off the back of a boat, representing Freddie’s constant drifting from life and responsibility, The Master never overwhelms with its imagery. This of course lets the characters be the real focus, but fans may find themselves less than pleased with this film’s look.

In the navy: Joaquin Phoenix, disillusioned and out cold

Johnny Greenwood’s assorted score is similarly incohesive, with each piece of music sounding like it comes from a different soundtrack. This has a brilliantly disjoining effect, and allows for a great variety of instruments to come to the fore: frazzled strings, pulsating bass, the joyous tinkling of a piano.

The Master is an easy film to admire, but a difficult one to love. The portraits painted of Feddie and Dodd are hugely impressive, but it is a struggle to find anything in either character to relate to. Still, full of sharp dialogue and energetic scenes, and with three astounding central performances, it is not an easy one to forget. It is one viewers will find themselves wanting to revisit, whether they even liked the film or not. Like The Cause itself, The Master is a strange seducer.

2 responses to “The Master – How to make an American cult”