Bullet to the Head – A shot of ’80s pulp entertainment

What demand there is today for action stars of the past making big screen returns is unclear, with Sly Stallone’s Expendables films raking in their fair share of cash, while Arnie’s latest vehicle crashed and burned by the roadside. A far greater box office disaster, though far less deservedly so, is Bullet to the Head, an ’80s throwback revenge thriller starring Stallone.

Based on a French graphic novel, Bullet to the Head is directed by another action movie legend, Walter Hill, that pulp fiction pioneer behind The Driver, The Warriors and 48 Hrs. Now in his 70s, Hill hasn’t let his talents for bare-bones action fare slip, pacing his new film like an ’80s thriller while keeping it modern with some fast editing and bright, lens-flaring lighting.

Stallone plays Jimmy Bobo, a New Orleans hitman with a code of honour (that old Le Samouraï cliché) who goes on a rampage when he is double-crossed and his partner is murdered. The story mirrors that of 48 Hrs., which saw a tough white cop paired with a cocksure black criminal; here the criminal is the tough guy, landed with a cool young cop tagging along. Attempting to recreate the racial clash at the core of 48 Hrs., Detective Taylor Kwon (Sung Kang) is Korean-America, which throws up a few witty, casually racist gags, but hardly has the same potency as the Nick Nolte/Eddie Murphy pairing. The ‘out with the old, in with the new’ theme is underscored by Kwon’s handiness with a smartphone for tracking down leads, while luddite Bobo would rather use his blunted wits. It’s almost a commentary on how omnipresent phone and internet access has killed off the kinds of film that Hill and his peers used to make.

The odd couple blaze a violent trail across New Orleans, which leads to corrupt businessmen  involved in the redevelopment of the city post Katrina. Adewale Akinnuoye-Agbaje plays the crippled and corrupt boss, Christian Slater is his Gordon Gecko-ish lawyer, Jason Momoa his human tank, all staples of the westerns and thrillers that made Hill the filmmaker he is.

It’s all very predictable, right down to the villains kidnapping Bobo’s daughter (Sarah Shahi) to wheel her out during the final confrontation, but it’s exactly what it wants to be. Hill has taken the pulp techniques he mastered back in the day and set them loose in an age of convoluted twists and never-ending action scenes.

The script is light and bouncy, with a few great one liners, delivered by Stallone in an “I’m too old for this shit” manner. Like Hill’s dream project, 1984’s Streets of Fire (also a box office flop), Bullet revels in the simplicity of the ‘last man standing’ trope and the variety of kills and explosions you can throw into that mix. The final showdown between Stallone and Momoa is a clear homage to the finale of Streets of Fire, one of several nods to Hill’s past works in a film that feels almost like a retrospective.

Yet despite what a throwback the concept is, there’s no question that Bullet to the Head is a 2013 movie, with a contemporary sheen to proceedings that separates it dramatically in look from Hill’s darker films of the ’70s and ’80s. New Orleans has never looked so bright by day or by night. A shot of a dead body floating in a pool, filmed from the bottom of the pool, seems to take a crack at Sunset Boulevard and its successors by having Stallone’s figure, standing at the edge, completely hazed out of focus. This may be a dumb action movie, but it’s a playful one.

While Hill is back doing what he does best, there’s little denying it’s not what audiences want any more. But for those nostalgic for old-school midnight movie fare in an age of endless CGI, Bullet to the Head will satisfy the craving in a manner far more satisfying than The Expendables or The Last Stand. This has no desire to be big, it only wants to be fun. And damn it, it is.

The Last Stand – Arnie keeps his promise… but only just

Still in command: Arnie is back!

Arnie always promised he’d be back, and we always believed in him. But then he went into politics, passed the gauntlet on to the likes of Jason Statham and The Rock and vanished, only to reappear in snippets of Sly Stallone’s Expendables films.

Now, aged 65, Arnold Schwarzenegger is back once more, the lead in a boisterous action movie with a threadbare plot. The more things change… eh?

The Last Stand sees Arnie play Ray Owens, the inexplicably Austrian sheriff of the US/Mexico border town Sommerton. Ray is, of course, a former top narcotics agent who saw too much bloodshed in LA, and has opted for peaceful retirement. No such luck.

After a daring escape, cartel godfather Gabriel Cortez (Eduardo Noriega) flees the FBI in Las Vegas, headed for the border in the world’s fastest car. His goons have already set up a temporary bridge across the gorge that separates Sommerton from Mexico, but the Feds aren’t expecting him to make the crossing there. So it’s up to the aging sheriff and his motley crew of hick cops and volunteers to protect the desert town from the mercenaries and impede Cortez’s getaway.

With a plot that simple, you’d hope The Last Stand could spice things up with plenty of action and comedy, but chances are you’ll be disappointed. The action comes in weak jolts until the eponymous last stand (more on that shortly), and almost all of the one-liners fall flat, revealing the half-heartedness of Andrew Knauer’s script. But if you can stick with it to the final act, action fans will be rewarded.

The English language debut of Kim Ji-woon, the Korean director of the demented comedy Western The Good, the Bad, the Weird and the excellent thriller I Saw the Devil, The Last Stand’s finale is a fine shoot ’em up setpiece. There are some excellent kills in the vein of Good, Bad, Weird, including the most gloriously brutal use of a flare gun since Dead Calm, and there’s enough humour playing on Arnie’s age to earn a few good giggles. The final showdown between Ray and Cortez is thrilling, as the two play a game of cat and mouse in a cornfield, before a punch-up that sees Arnie’s sluggish strength match the villain’s weaker but more sprightly frame.

Arnie, looking a little too much like a wax model of himself with terrible hair plugs,  has command of the unchallenging role, although the dreadful one-liners give him no chance to use the comedic muscles he used to flex so well. Noriega is your bog-standard ethnic villain, but Peter Stormare really cranks it up a notch as his malicious number 2. 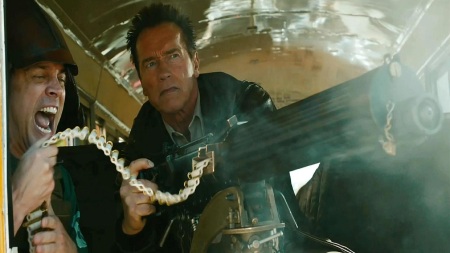 Forest Whitaker slums it shamelessly as the FBI chief on Cortez’s trail, while Luis Guzmán gives it just the right amount of silly as Ray’s deputy. Harry Dean Stanton appears all too briefly in a typically fine cameo, while Génesis Rodríguez is in there, somewhere, you probably won’t notice. She’s awful. In the film’s biggest surprise, Johnny Knoxville is actually quite entertaining (or at least not annoying) as local gun-nut Lewis, who supplies the heroes with their heavy firepower in the tradition of the greatest of all desert town defence movies – and no, I don’t mean Rio Bravo, I mean Tremors!

Formulaic to the last, The Last Stand is passable action fluff, but certainly a disappointment when Ji-woon’s past career is taken into account. At the very least, it’s proof that Arnie’s still got it. Of course, at no point in The Last Stand does he utter the immortal line “I’ll be back”, so this time we can’t be sure he will be. With disappointing box office turnout around the world, hopefully this won’t come to be Arnie’s actual last stand. That would be the biggest disappointment of all.