Side Effects – Always read the label

The drugs don’t work: Jude Law in Side Effects

Allegedly Steven Soderbergh’s last film (I for one won’t believe it ’til he’s dead), Side Effects is an adept, twisty work that ranks among the prolific director’s more interesting and unexpectedly strong films.

More familiar to audiences for his straight, often stripped-back genre pieces such as Sex, Lies, and Videotape, Traffic, Ocean’s Eleven, Magic Mike and Haywire (the latter was so stripped back it even forgot to add character, dialogue or story), Side Effects exists on a plane closer to his tongue-in-cheek heist movie Out of Sight, in terms of toying with genre. Almost an hour into this film you still can’t quite predict which turn it’s going to take, into what kind of movie.

Evoking Hitchcock in its first frames, Side Effects leads with one of the most stylish scenes of foreshadowing in recent memory; a mysterious toy sailboat, a dead body and fresh bloody footprints on the floor. While the mind digests these images, we turn to a few months earlier, as Emily (Rooney Mara) awaits the release of her husband Martin (Channing Tatum) from prison after a stint for insider trading. Martin’s return has a surprisingly negative effect on Emily, whose longstanding depression begins to consume her. A suicide attempt lands her in the care of psychiatrist Jonathan Banks (Jude Law).

Playing on fears of prescription addiction in modern America, Side Effects sees Jonathan prescribe Emily a series of pills to calm her, help her sleep, give her energy, kick-start her sex drive, etc. Each pill has a side effect cancelled out by the next. When Emily begins to crack, the answer seems to come from her previous shrink, Victoria (Catherine Zeta-Jones), now a pharmaceuticals rep. The shifty Victoria recommends a new partially tested drug, Ablixa, which helps Emily get her life back in order. But soon a shockingly violent incident, apparently a side effect of the drug, lands Emily in hot water and Jonathan, who prescribed her meds, fighting for his career. 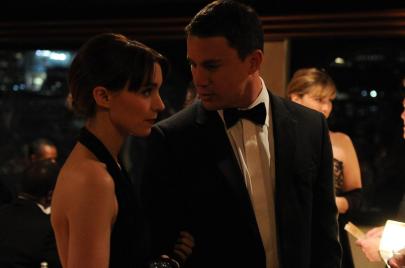 The twists come fast in this psychological thriller, which often threatens to veer into increasingly unexpected territory. An early shot of Emily’s distorted reflection in a barroom mirror hints at a Cronenbergian metamorphosis. An undercurrent of sexual tension constantly shifts Emily and Jonathan between the roles of hero and villain.

While these twists are welcome, it is a shame that Side Effects goes down the least ambitious route it could. Writer Scott Z. Burns, who scripted Soderbergh’s Contagion and The Informant!, chooses to weave his tale around the use and abuse of anti-depressants, rather than draw analogies that might make the same points with more inventive imagery and less subtlety.

Soderbergh’s editing is tight and he shoots his film finely, although his excessive toying with focal depths to recreate sensations of drug use grows old long before the film’s end.

Mara, in her first mainstream appearance since The Girl With the Dragon Tattoo, carries much of the weight of the film on her teeny shoulders, and does not disappoint. Jude Law drifts between slightly seedy and panicked fall guy in one of the best performances he’s given in years. Zeta-Jones plays it perfectly coy, while Tatum continues to impress, however miscast as a Wall Street big shot.

Stylish and clever, but undemanding of both itself and its audience, Side Effects is a fine, twisty thriller, and a decent swansong for Soderbergh. But then no amount of drugs could make us believe for a moment that he’s really done.