Crimson Peak – I’m not that Innocents 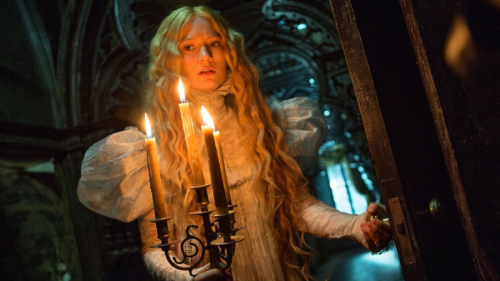 I have this thesis on Guillermo del Toro. It stems from enjoying most of his films, but rarely loving any of them. There’s Pan’s Labyrinth, a film I flat-out adore, and there’s Pacific Rim, a big dumb movie that shamelessly tickles all the happiest childish parts of me. Otherwise, I can take or leave his work. Parts of the Hellboys delight, and The Devil’s Backbone is a beautifully put together if frustratingly simplistic fable. His TV series The Strain, adapted from his trilogy of airplane novels, is the sort of trash I greedily ingest between episodes of HBO-or-similar shows, but still find myself half-watching my phone the whole time. Because let’s face it, Guillermo del Toro is a great designer, but he’s rarely a great storyteller. Scratch that. He might be the best designer.

All of this is a roundabout way of saying that, expectedly, del Toro’s latest, Crimson Peak, is a gloriously designed spectacle, but it is also in so many other ways a farce. Its DNA spliced from the core strands of gothic romance, the film begs to be given the dues of a Rebecca or The Innocents, but is really just a subpar Dragonwyck rolled in a tasty supernatural burrito.

So here’s the story. Mia Wasikowska plays Edith Cushing, the bookish daughter of a successful self-made Albany businessman and widower in the waning days of the Victorian era. Edith has aspirations of becoming a romance writer and a curious and unexplained tap into the netherworld that allows for occasional ghostly visitations. Tom Hiddleston is Sir Thomas Sharpe, a visiting English aristocrat whose vast family riches have been depleted, with a stately manor that has fallen into Money Pit levels of disrepair. With his caustic and pernicious sister Lucille (Jessica Chastain) by his side, he’s in town desperately seeking capital to help mine the valuable supplies of blood-red clay that sit beneath their hilltop home. A few swoons and a murder later, Edith is off to England to see her new husband’s home.

If that bloody goo oozing up through the ground and the mother-shaped wraith warning her to keep away from some place called “Crimson Peak” weren’t enough to make Edith run for it, the house’s state of decay should have. Cartoonishly gothic, with a hole in the roof that Disney’s Haunted Mansion would blush at, the Sharpe Family home is as unwelcoming as its owner is dashingly handsome. Soon enough, del Toroan leaking ghosts are clambering through the walls, and someone is definitely trying to poison poor Edith.

On paper it’s the perfect project for the Mexican minstrel of the macabre. He has wildly elaborate sets to play with, drenched in saturated colours of dark hues, CGI-makeup-hybrid ghouls, poofy turn-of-the-century costumes, and even complex steampunk mining equipment to indulge his concerning clockwork fetish. As so often with his films, it’s a flimsy screenplay, co-written with Matthew Robbins, that leaves the film struggling at the best of times, and fails to attach any emotional or conceptual resonance to some finely realised imagery.

What the film does have, however, and all too rare in the del Toro canon, is a sense of camp. The film regularly simmers with it, and Jessica Chastain’s frantic performance spits it out in clots thicker than that visceral clay. If anything keeps the film aloft, it is the camp value (see the portrait of the late Mother Sharpe), but even this is abused by del Toro. Upon first arriving at Crimson Peak, Thomas advises Edith to take a bath, but warns (in the film’s most humourous moment) that the tap will briefly run red. It’s a wonderful play on an old horror cliché, but it’s undone moments later when, as Edith turns on the tap, del Toro plays its spluttering of bloody water for a scare, complete with Wasikowska gasp and musical sting. The director wants to have his cake and eat it too, and to watch the jam inside ooze everywhere as well.

On top of this, there’s surprisingly little tension to be had, nor mystery. The clumsily handled murder scene early on leaves no question as to whether the siblings can be trusted, and the underlying eroticism of Thomas and Edith’s romance flounders under his blatant Monsieur Verdouxism. Two achingly predictable last act twists are handled completely upside down – Edith takes the revelation that she is to be murdered with preposterous calm, and flees for her life upon learning a secret that should only add up to a serious breach of trust and an uncomfortable fireside chat. Any chance of going full Turn of the Screw and letting us wonder if our heroine is imagining things is mangled by the opening lines of the film; narrating from a position of post-film survival, Edith assures us “ghosts are real”. Well then, that’s that then. (The line seems all the more grating and unnecessary given how attractively inessential the ghosts actually are to the story).

The dialogue goes little better, often feeling jarringly twentieth century. Speeches about carnivorous moths and ghosts stories (or, stories with ghosts in them, hint hint) are the wrong kind of unsubtle. ADR (post-production over-dubbing) is evident throughout, especially whenever characters talk about Victorian-era technology, planting thoughts that the script as written was even more troubled than what has ended up in the finished film.

Despite itself, Crimson Peak is never quite boring (despite tertiary love interest Charlie Hunnam’s most valiant efforts to bland it into submission). Wasikowska is misguidedly directed, but she throws a good deal of energy at it, and Hiddleston is always modestly electrifying. Chastain, hamming it up to the nines, casts away her full house of Oscar-worthy performances and just goes for it with all the gusto she can manage.

An English-language triumph still evades del Toro, but he has once again produced a hauntingly beautiful, if painfully unsatisfying film. Too shallow to be high art, too confused to play as shocker, it will simply act as a stand-in film in his career while he searches for a truly personal project worthy of his talents. Perhaps, if we’re truly lucky, he might turn to design full-time and help make another director’s work look the very best it could.

I know what you’re thinking. “Did the world really need another vampire movie?” The answer is assuredly no. But then, did the world need a vampire movie directed by Jim Jarmusch? Certainly not! Are we better off that we now have one? Actually, yeah, a little.

Jarmusch, one of American cinema’s greatest eccentrics, has dabbled with genre pictures before – his last movie before this was 2009’s esoteric hitman thriller The Limits of Control. Here once more he takes a done-to-death (pun unintended) genre and makes it distinctly Jarmuschian – more so even, in that Only Lovers Left Alive seems to be repeatedly referencing the auteur’s filmography. There are tinges of Broken Flowers in the reunions of old friends and lovers, and a number of extended night-time driving scenes conjure memories of Night on Earth.

Tom Hiddleston and Tilda Swinton play the problematically named Adam and Eve, two vampires married for some 150 years, although Adam is many centuries older and Eve may predate him millennia. As their numbers have dwindled and their race developed a conscience, these children of the night have moved into isolation, despairing at the failure of “the zombies” – what they call humans – to evolve to meet their true potential.

Adam, possessed of the gift to play any instrument (it is alleged he wrote music attributed to Schubert back in the day), lives apart from Eve in Detroit, soaking in the industrially drained city’s music history and releasing it with his own remarkable new alt-rock compositions. Eve, meanwhile, spends her nights in Tangiers, Morocco, absorbing tomes of literature and hanging out with her vampire pal Kit (John Hurt), who is in fact the immortal form of the Elizabethan playwright Christopher Marlowe. While Adam and Eve keep in touch via FaceTime, the distance has begun to grow too much for the pair, and Adam’s increasing despondence at the state of mankind is pushing him towards thoughts of suicide. Eve decides to take a night flight to visit him, and their romance blossoms anew.

The concept of immortality clearly tickles Jarmusch pink and he and his stars have boundless fun with it. Adam and Eve’s anecdotes about great moments in history that they experienced, or regretfully missed, are delivered as deadpan as possible, but you almost want to see Hiddleston and Swinton corpse (pun intended this time) just so they can laugh with you. Their habit of naming all flora and fauna by their Latin genera never fails to draw a smile.  But more so it’s the idea of a literally undying love that gives Jarmusch and his performers the most room to play with. Adam and Eve can ponder their eternity together, or, when things look bad, the impending collapse of that presumed eternity together. Hiddleston and Swinton, with their similarly angular faces, ghostly pale skin and slender bodies look not so much like they were made for one another but rather that they have grown to look like one another over the decades.

The cinematography by Swimming Pool and Carlos D.P. Yorick Le Saux is excellent, capturing the grim moodiness of Adam’s hideaway and making the darkness of Detroit and Tangiers seem unthreatening and even hopeful. The opening shot of the film, a night sky full of stars, spins into a trail of lights that forms a perfect graphic match with a turntable spinning gently in Adam’s apartment.

The music is another standout point of the film; Dutch composer Jozef van Wissem provides an ethereal rock score that, while it may not sound quite as magnificent as characters within the film claim it does, does sound like something very new. Whether through clever camera trickery or impossible talent, Hiddleston is seen playing a wide range of instruments in the film with exceptional skill – regardless of who is playing, it helps sell the idea of this immortal who has had centuries to perfect himself.

The film takes an unfortunate dip in the second half with the arrival of Eve’s sister Ava, played by Mia Wasikowska in a role assumedly written for Juno Temple. She intrudes as much on the film as she does on the lovers, and her feckless attitude to her vampirism contradicts the subtlety of the universe that has already been established.

Perhaps Jarmusch’s most playful film to date, Only Lovers Left Alive is not quite as deep as it often thinks it is. But it is a pleasure to watch for almost all of its two-hour runtime. It will almost certainly be best remembered for how in a world awash with vampire stories it managed to create a number of new ideas. Including blood popsicles. Nothing beats blood popsicles.