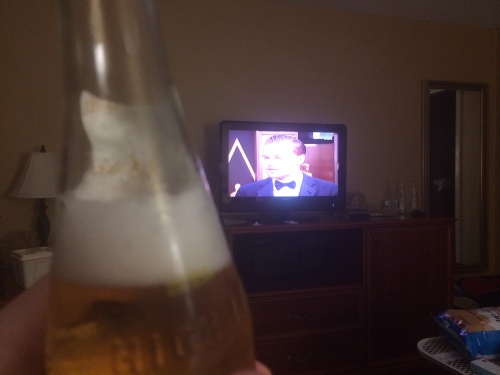 Life is good. Oscars may be.

There’s a snow storm coming, but inside there is beer and the Oscars. We can only hope for an entertaining night, full of probably not that many surprises, but surprising non-surprises.

[All times are in Pacific Time, all Thai food is in my belly.]

4:46pm – Who are all these Oscar interns and why am I none of them?

4:47pm – Thank god U2 are here. I thought for a moment I couldn’t play the bitter annoyed Irish card all night.

4:51pm – Alfonso Cuarón, his O looks small because you can’t put an accent on a normal O.

4:56pm – Tyson Beckford looks like he has been PhotoShopped to life.

4:59pm – Bradley Cooper: too handsome to like, too charming to hate. He’s the Switzerland of people.

5:02pm – Lupita Nyong’o in white. Seems she takes her memes to heart.

5:06pm – The Oscar coverage is making fun of people tweeting the Oscars… this sketch is going nowhere good fast.

5:09pm – That Jimmy Kimmel sketch was drenched in classism, and lightly sprinkled in not good comedy.

5:13pm – It’s Mr. and Mrs. Smith! No, not Brad and Angelina (nor Robert Montgomery and Carole Lombard), it’s Will and Jada Pinkett!

5:15pm – Nobody doesn’t quite wear a goatee quite like Jeremy Renner.

“The person I went into as filming this movie is not the person I came out of this movie as.” – Sandra Bullock says, referring to her paycheck.

5:23pm – Take a deep breath everyone, we are now in the theatre!

5:33pm – I hope the real Captain Phillips and the real Philomena make out at the after party.

5:35pm – Some savage material from Ellen DeGeneres here. It could be more biting than actually funny.

5:37pm – Jennifer Lawrence getting a ribbing for falling on her face. Ellen managing to get off her own with this bit.

5:44pm – Leto tells the story of his mother instead of thanking people he worked with. Ungrateful prick!

5:48pm – Jim Carrey is recovering this sketch… just about.

5:50pm – About 70% of those animated films were made after the year 2000. An absolute embarrassment from the Academy there.

5:51pm – Will Ferrell is performing a happy song in blackface. How is this appropriate?

5:53pm – In fairness, the choreography here is pretty delightful.

6:05pm – Channing Tatum is here to show us those damned students again. But I wanna be one of them!

6:12pm – Best Animated Short goes to Mr. Hublot. I did not see it. My friend said it was awful. Now I don’t know what to think!

6:16pm – Hooray for Frozen! Plus it burst a billion today! All the money and success. Disney’s first animated feature Oscar.

6:21pm – And the gravity award for best gravity in a gravity-themed film goes to… Gravity!

6:24pm – Zac Efron presents Karen O. She will now sing a lovely song that will slow down the entire night to a crawl.

6:34pm – Best Documentary Short goes to The Lady in Number 6. The subject of which like just died the other day. What terrible terrible timing.

6:37pm – Best Documentary Feature goes to 20 Feet From Stardom. I did not see it, but The Act of Killing was surely robbed.

6:39pm – There is a singsong going on on stage right now. It’s the Oscars, why isn’t this happening always?

6:41pm – Lifetime awards to Angela Lansbury, Steve Martin and Angelina Jolie. Which coincidently enough is the dream cast to play me in the movie of my life.

6:50pm – Paolo Sorrentino wins the Oscar for Il Divo! But also I guess for The Great Beauty.

6:54pm – Brad Pitt is here. He is going to do something important I wager.

7:07pm – Sound Mixing goes to Gravity. Which is ironic because there’s no sound in space.

7:12pm – Christoph Waltz is here to present the decider for the rest of the night; Best Supporting Actress.

7:14pm – Cheers for Lupita Nyong’o! That makes tonight a rollover, in exactly the right direction.

7:16pm – A beautiful, passionate and tear-flecked speech from Nyong’o. Bravo bravo and bravo.

7:21pm – Ellen ordered in pizzas. They have Coca-Cola logos on them. This is not OK.

7:22pm – Remember when the Oscars did music numbers and was an actual show?

7:26pm – Amy Adams and Bill Murray. I would read that slash fiction.

7:31pm – Gravity wins again. Another tech award for the pile. Not convinced it deserved that one either…

7:36pm – I associate Pink Floyd with The Wizard of Oz, not Pink…

7:38pm – Remember when they made films like The Wizard of Oz… not like Oz: The Great and the Powerful?

7:45pm – Gatsby gets it again! Can American Hustle win anything?

7:47pm – A tribute to superhero movies. Otherwise known as the box office.

7:59pm – Bette Midler sings ‘Wind Beneath My Wings’. Everyone everywhere is crying and sad and crying sad.

8:05pm – The Oscars crashed Twitter. Hopefully that’s not the best thing that happens at the Oscars tonight.

8:06pm – Goldie Hawn is talking 12 Years a Slave. I have never thought of one without the other.

8:11pm – Menzel kills it. The audience has to stand because they did for U2.

8:13pm – Jamie Foxx and Jessica Biel are getting their groove on on stage. Or at least he is.

8:23pm – Ellen is passing a hat around the audience to raise some money. Hopefully to go towards some better bits.

8:26pm – “All the praise goes to Solomon Northup; those are his words.”

8:32pm – Angelina Jolie helps Sidney Poitier to the stage. A superb ovation for him. Nomination for Best Director pending…

8:34pm – Alfonso Cuarón wins Best Director, for best handling of a film that should have been awful.

8:37pm – A fine speech by Cuarón, and an important moment for Hispanic filmmakers overall.

8:43pm – Terrible clip to show off why Sandra Bullock is even nominated in the first place.

8:44pm – Cate Blanchett wins which was expected why I am even mentioning this?

8:45pm – “Random and subjective” – Cate Blanchett on the Best Actress Oscar. Good for her.

8:48pm – Jennifer Lawrence is here to present lust. Lust to all. Lust.

8:53pm – Matthew McConaughey thanks his mama, and… Charlie Laughton? Sure, why not?!

8:57pm – Actually 12 Years a Slave. So deserved. So gloriously deserved.

8:59pm – Steve McQueen gets his say. Nervous, emotional, but he says what he must, focusing on the powerful women in his life. Wonderful.

9:00pm – A final call to end slavery around the world, and a leap. A leap for joy from Steve McQueen. True Oscar magic.

And that was the Oscars 2014. An enjoyable night, although low on spectacle, but the awards went mostly to the right people. And now to not think about next year’s show for a very, very long time…