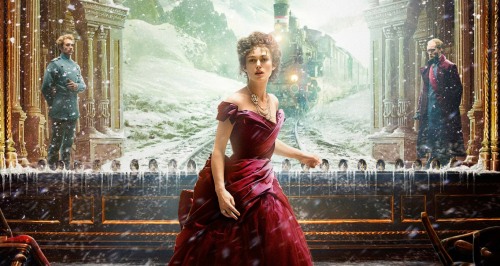 All the world’s a stage

Not another costume drama; I hear you say. And you couldn’t be criticised for saying so. It’s not that there have been an excessive number of period films in the past few years, or that they have not been of a high quality, but that the surge in well-produced TV drama has seen an explosion on our screens of ball gowns, steam engines and lives ruined by affairs. The costume drama has come down with a terrible case of the Downtons.

But Joe Wright’s Anna Karenina is something special. Not since Tom Jones has a costume drama been as ambitious, indeed audacious, stylistically as this film is. Leo Tolstoy’s tale of ball gowns, steam engines and lives ruined by affairs has been injected with a burst of visual flair by the Atonement auteur, staging much of the action within a 19th Century Russian theatre, where characters move from scene to scene as if in an epic, shifting play.

Within this theatrical world, the stage itself plays host to bedchambers and offices, while the house is home to work floors, train stations and ballrooms. The poorer denizens of Moscow are briefly found living in the rafters amongst squalor and sandbags. But like Larry Olivier’s Henry V the doors are soon flung open to the outside world and Wright’s camera becomes free to roam in the icy wilds of Russia.

It’s a remarkable production of a book that has been filmed many times before, and while the text gives no real reason for such a theatre-themed rendition, Wright’s excessive cinematic flair not only justifies the stylistic choice but makes it the film’s biggest draw. Returning to the period drama after the critically mauled Oscar-slut The Soloist and the misjudged teen assassin oddity Hanna, Wright has produced his most visually tantalising film yet. There are plenty of examples of his trademark extended tracking shots, which are here used to sensational effect, with scenery and costumes changing on screen within the theatre to transition between scenes. A sweeping ball room sequence builds to a fevered pace to express burning desires and frantic jealousy, while in the film’s greatest set piece a thrilling horse race is remarkably enclosed within the theatre, with the animals thundering across the stage.

Wright regular Keira Knightley stars as the tragically smitten Anna Karenina, who although married to the good but closed-off Alexei Karenin (Jude Law), finds herself unable to resist the excessively charming Count Vronsky (Aaron Taylor-Johnson). When the star-crossed lovers meet, sparks all-too-literally fly and a very public scandal is not far off. 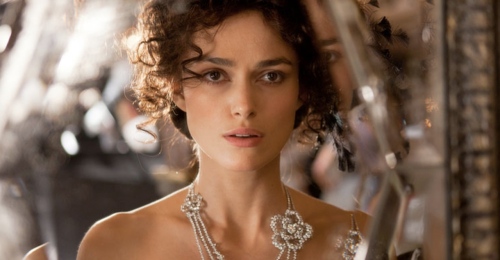 Diamonds are your eyes’ best friends

Knightley gives a strong performance in the title role, although she permanently looks too young to play the princess (the passage of time is unfortunately poorly indicated). But her face, captured in repeated close-ups, is as beautiful as the gowns and diamonds that coat her person, and Wright tells his story through her amplified expressions, swamped in light. 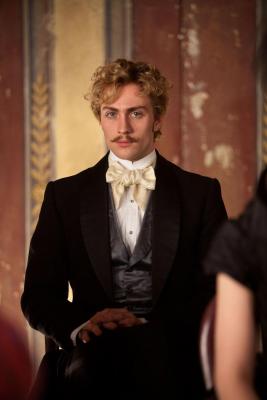 As Vronsky, Taylor-Johnson is a weak link, not quite capturing the character’s newfound romantic nature as Anna draws him out of his womanising. Jude Law is surprisingly restrained as the jilted, befuddled Karenin, and is all the better for it – this is one of his finest performances in years. But the film’s most inspired performance is that of Domhnall Gleeson, sporting a luxuriant ginger beard as Konstantin Levin, an idealist aristocrat hopelessly in love with a spoiled young debutante. Gleeson evokes a remarkable sadness coupled with an honest pride that he is doing the best he can with his life, and his scenes are in every case a joy to watch.

The screenplay, by the venerable Tom Stoppard, finds ample romance and tragedy and even a healthy dose of comedy in Tolstoy’s text, and the film never gives way to excessive narration to tell its story. While the pacing runs out of steam for much of the final act, the resolution is well composed and no scene feels out of place.

Whether or not audiences take to the film’s theatrical flair remains to be seen, but Wright’s ambition is not to be scoffed at. With production and costume design more glowing than the Oscar statuettes they will win, Anna Karenina is a visual feast from the moment the curtain goes up.

Old people can go on holiday too, you know…

Over the past 20 years British filmmakers have shown a remarkable knack for producing solid, if not exceptionable, entertainment for older filmgoers. Films such as Calendar Girls and Mrs Henderson Presents have brought in the viewers, often in their senior years, while also being satisfying enough to keep the critics from giving them the mauling their American equivalents receive (c.f. It’s Complicated).

The latest of these goldies for oldies is The Best Exotic Marigold Hotel, a coming of old-age comedy drama about finding yourself, even if it’s only in the autumn years.

The film follows seven seniors (played by actors ranging from their late 50s to their mid 70s) who find themselves travelling together to a paradisaical retirement home in Jaipur, India. Douglas and Jean (Bill Nighy and Penelope Wilton) are escaping a future in an old folks’ home. Widow Evelyn (Judi Dench) needs to get away from the memory of her husband. Wheelchair-bound Muriel (Maggie Smith) needs a new hip, and will get it sooner in India. Graham (Tom Wilkinson) quits his role as a top judge to seek out an old friend in the city where he grew up. Norman (Ronald Pickup) is just there to get his geriatric jiggy on, while Madge (Celia Imrie) is after her umpteenth husband.

“Oh I am so excited to see a movie aimed at my demographic!”

Of course the hotel is not what its Photoshop-blitzed website advertised, and the seniors find themselves at the mercy of Dev Patel’s hotel manager – a kind-hearted but cheesy salesman type, determined he can “outsource” Britain’s elderly. As repairs to the crumbling hotel go on around them, the British guests find themselves, for the most part, being slowly seduced by India’s blatant and hidden beauties.

There’s no denying the first 30 minutes of Best Exotic Marigold Hotel feel familiar. They follow the same trajectory as every holiday from hell comedy you’ve ever seen. But after that something shifts, and this late-life crisis movie becomes something altogether different, more honest and much, much sweeter than expected.

While this is partially down to the restrained direction of John Madden (Shakespeare in Love) and an unexpectedly original script, the real saviour of this film is the performances. While Dench is a little on auto-pilot, she manages to pull off some magic here, especially when opposite Bill Nighy. Maggie Smith goes completely against type to play a working-class woman who spouts the sort of racist comments that would cost a highly rated American comedian their career. Penelope Wilton, best known to half the audience as Shaun’s mum in Shaun of the Dead (where she was also married to Nighy, curiously) and to the other half as Cousin Isobel in Downton Abbey, also rejects the usual sweetness she is typecast with and here plays the uptight bitch.

However, it is Tom Wilkinson, playing an Englishman again for the first time in what feels like forever, who steals the film, with his best performance since Michael Clayton in 2007. He delivers many of the film’s best lines with an honest intensity beyond what the film calls for, and his story would only fail to touch the stoniest-hearted of viewers.

With little sense of mysticism or magic and none of the ‘white people solve foreigners’ problems’ one might expect of a similar Hollywood production, this is honest, well-meaning fun, and won’t just appeal to filmgoers over 60. Patel’s performance may hover on the border between stereotype and racist, but the overall image of India presented is a positive one. Though, much like some of the film’s characters, it won’t be to everyone’s taste.

A final word of warning; the film suffers from a violent case of ‘best lines in the trailer’-osis. If you’ve already decided to give the film a look, I recommend avoiding the trailer at all costs.