You may remember Abraham Lincoln; slim gentleman, tall hat, cameoed in Bill & Ted’s Excellent Adventure. You would think that’s all you’d need to know about the American president and slave-liberator before going into a film with this title, but in actuality Abraham Lincoln: Vampire Hunter shows a great deal of knowledge, and a surprising amount of respect, for its subject. Too bad its lack of silliness is to its detriment.

Adapted from the humorously historical-revisionist novel by Seth Grahame-Smith, the best-selling author of Pride & Prejudice & Zombies, ALVH is altogether too serious for the B-movie idea at its core.

Directed by Timur Bekmambetov, the Kazakh madman behind the deliriously silly Wanted and off-the-wall Russian vampire yarn Night Watch, ALVH is a straight-up biopic with fantasy/action inserts that manages to be fascinating, thrilling and occasionally a little bit boring.

So, what’s the fact and the fiction? Abraham Lincoln (Benjamin Walker) is a young man from Illinois in the 1800s [true] who trains to be a vampire hunter [false] after his mother dies [true] at the hands of an undead fiend [false]. He is aided in his quest for vengeance by vampire expert Henry Sturges (Dominic Cooper, perfecting the Dominic Cooper role), who teaches him the art of slow-motion axe-wielding.

Soon he is slaying vampires by night and boning up on the law by day, while courting the beautiful Mary Todd (Mary Elizabeth Winstead), who begins to suspect that this not-quite-so-honest Abe has a dark secret. When Abe learns that plantation-owning vampires from the South are supporting slavery to keep a steady food source for themselves, he decides to kill two birds with one axe by moving to abolish slavery and denying the monsters their meals.

In all of this the film follows Lincoln’s life with surprising accuracy, with the last act focusing on his years in office (with added vampires). Before he woos Mary, she is (true to life) dating Stephen Douglas (Alan Tudyk), later Lincoln’s biggest political rival. If you wrote this in a high-school drama it would almost seem unbelievable!

The film is at its weakest during the vampire sequences, with darkly lit scenes, shaky cam and rapid editing combining to create dizzyingly difficult-to-follow action sequences (and then there’s the 3D on top of that). The action has all the mania of Wanted without any of the wit. As chief vampire Adam, Rufus Sewell slums it wearily, finding neither camp nor relish in the role. 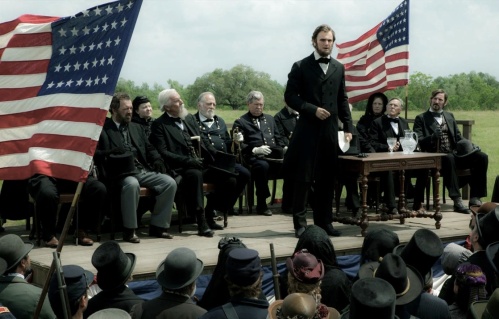 Lincoln: As wicked with a speech as he was with an axe

But in its strict ‘Lincoln the man’ scenes the film finds unexpected success. In the lead role, relative newcomer Walker excels; playing young Abe all Peter Parker, the nervous nerd with a secret, while carrying shocking levels of gravitas as the president Lincoln. This is not Henry Fonda in Young Mr. Lincoln, but it subscribes to the same school – Walker has completely committed to the role as if it were Steven Spielberg’s forthcoming biopic Lincoln, and it is utterly endearing. Winstead similarly shows acting chops far beyond what is required of a nonsense blockbuster.

A few jump scares aside, the film’s pacing really begins to drag it down, and the final act goes on forever. You’ll be checking your watch four score and seven minutes in, and there’ll still be 15 minutes left in the movie.

There’s no denying that this should have been an unmitigated disaster, and thanks to superb production values and Walker’s remarkable breakout performance we instead have a curiosity on our hands. It remains to be seen whether or not there’s an audience out there for it.