Torturing us all for the shock success of Battle: Los Angeles back in early 2011, Hollywood has begun its own alien onslaught, flinging some half dozen end-of-the-world science fiction films at us this year.

The first up is Oblivion, Joseph Kosinski’s follow-up to the flashy and distracting, if slightly moronic and empty, Tron: Legacy. An eye-wateringly glossy post-apocalyptic mystery adventure, it is a finely assembled work, that has been finely assembled from other, better films.

Seventy years after a war with alien scavengers, the Scavs, Earth has seen better days. The destruction of the Moon has caused geographical discombobulation on an Emmerichian scale, and the plundering of the resources of what used to be the blue planet has meant that mankind has had to relocate to one of the moons of Saturn. The Scavs, defeated, have scurried in fragmented numbers underground.

Tom Cruise plays Jack Harper, one of the last humans remaining on Earth, as part of a clean-up detail. A high-tech mechanic, he repairs the drones and devices that keep the Scavs at bay and recoup the last of Earth’s energy for the new human homeworld. His only contact is with his communications officer Victoria (Andrea Riseborough), who keeps him advised on every move he makes. They live together in a Big Brother house in the sky, and, at the slightly creepy encouragement of their mission commander, Sally (Melissa Leo), who directs them in fractured messages from beyond the stratosphere, to engage in carnal discourse, because that’s what makes “an effective team”.

But not everything is as it seems. Jack has incomprehensible flashbacks to a time before the war, despite his memory having been wiped for mission security reasons. He collects trinkets from the once great civilisation of New York, now flooded in silt and rubble: toys, records, books, a Yankees cap. Soon the Scavs begin to take a personal interest in Jack’s movement, and then the woman of his dreams literally comes crashing back into his life. What, exactly, is Jack and Victoria’s mission? 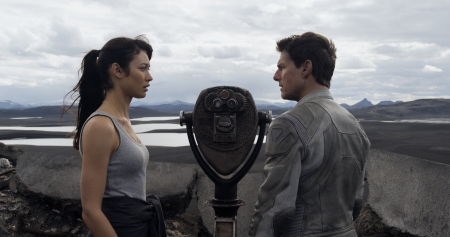 If any of this sounds familiar, you shouldn’t be surprised; it should. “Derivative” is a word that gets thrown around a lot, and in relation to science fiction it’s as commonly used as “darker” is in superhero movie reviews. But Oblivion might just be the most derivative film ever made. Like, class action lawsuit derivative. Its central ideas and themes are fused from a number of recent and classic science fiction films. Visually, its space pods and structures hearken back to countless other sci-fi designs. Even its action scenes seem overly familiar in pace and choreography.

Take the drones – almost identical to the pods from 2001: A Space Odyssey, they are similarly controlled by a red electric eye. Instead of claw arms, they have cannons which fold out from their sides like EVE from WALL•E (and they share her iPod veneer). But reacting to Cruise’s raising of his weapon, and failing to react to his lowering of it, the drones show an identical programming to ED209 from RoboCop. When a drone is summoned for termination purposes, a drone without a minty white coating appears, revealing a black skeletal series of patterns across it in the vein of a T-800. At a moment of supposed high tension the Terminator allusion is simply guffawable. That’s four films unmistakably sampled in one brilliantly realised prop.

Other films blatantly referenced or “borrowed from” in Oblivion include (in alphabetical order to avoid spoilers): Aliens, I Am Legend, Independence Day, Invasion of the Body Snatchers, The Matrix Revolutions, Moon, Planet of the Apes, Predator, The Road Warrior, Silent Running, Solaris, Star Wars, Stargate, Total Recall, Transformers: The Movie, War of the Worlds. It’s actually a fun game to count them, although repeatedly it forces you out of the film, as Oblivion makes you think of beloved classics instead of, well, the story in progress. Kosinski, directing from a script polished by Toy Story 3’s Michael Arndt and The Departed’s William Monahan but based on an unpublished graphic novel he had written himself some years back, is all too unsubtle in his inspirations, and they cloud the fact that at many levels Oblivion is quite a strong film.

Cruise takes a role that only a select few actors could have made work and, despite limited characterisation, holds the movie together when it is at its weakest, most ramshackle points. Riseborough plays the increasingly Pod Peopled Victoria with some admirable restraint. Olga Kurylenko does her best in a role the film’s four writers all managed to overlook, while Morgan Freeman shows up to take the most relish he has in any role since Wanted.

On a technical side, the movie looks sublime, and not much of that can be handed to its… influences. Kosinski has a great feel for the visual, and refusing to shoot in 3D to keep the whites dazzling and the blacks standing out  was a great decision that shows a huge amount of confidence in the director on behalf of production studio Universal. Life of Pi’s D.P. Claudio Miranda brings every image sharply to life, while the soundtrack by French electronic outfit M83 pulses with an energy that drives much of the film forward and escalates some of the weaker drama.

In the end, Oblivion falls on its own laser sword*. It looks and sounds great throughout, but assembled like a Frankenstein’s monster from so many superior films not only dilutes the enjoyment but dilutes its own sincerity. “Earth is a memory worth fighting for” runs the tagline, but the memories on display here are all film memories, scavenged from the sci-fi greats of the ’50s to the present. They are worth fighting for, and remembering their origins and not the film that dared to harvest them all is what matters.

Oblivion is a superbly crafted film, but its memory will not be long for this world.

*Laser swords are one of the only clichés of the genre Oblivion skipped, thankfully.